The World Cup is the most prestigious association football tournament in the world, as well as the most widely viewed and followed single sporting event in the world. The FIFA World Cup is an international association football competition contested by the senior men’s national teams of the members of the Fédération Internationale de Football Association (FIFA). It is the sport’s global governing body. FIFA has awarded the championship every four years since 1930. The 2022 FIFA World Cup will be the 22nd running of the FIFA World Cup competition. It will take place in Qatar from 21 November to 18 December 2022 as scheduled. However, this will be the first World Cup ever which will be hosted in the Arab world. Following the co-hosting of the 2002 FIFA World Cup by South Korea and Japan, Qatar 2022 will be the second AFC World Cup ever.

The biggest football festival, 22nd running of the FIFA World Cup competition will start on 21st November (Monday) as per schedule. The opening ceremony will be held in the city of Al Khawr and at the 60,000 capacity Al Bayt Stadium. Not much has been reported about the opening ceremony of the 2022 World Cup yet. However, Qatar will not be participating in the opening match. Since the inception of the World Cup 21 editions ago, the hosts have played the opening match to welcome every participant to their country. Qatar, however, will be breaking this tradition this year. The other teams in Group A, Senegal and the Netherlands, will play the afternoon kickoff as the opening match of the 22nd World Cup.

A total of 32 nations consisting of 8 groups will be playing this year’s Qatar World cup. Fans can enjoy 65 thrilling matches in the journey to decide the 22nd winner of the World Cup. The tournament will start as usual with 32 teams, which will be cut down to 16 after three rounds of matches. The 16  teams will then play in knockout rounds until the semi-finals where the losing teams will face each other for third place and the winning teams will face each other to determine the champion. The group division for this year is

The tournament will however, be hosted by five cities. These are Doha, Lusail, Al-Haur, Al-Wakrah and Al-Rayyan. The World Cup matches therefore will occur at eight stadiums of these five cities. The final match will be held at the “National Stadium” in Lusail on 18th November. Which is also the ‘National Day’ of Qatar.  The Qatar 2022 World Cup is unique for a number of reasons, among which is its compact nature. There is no need for air travel to venues for both fans and teams as all the stadiums are in close proximity to each other.

The stadiums will host the following matches: 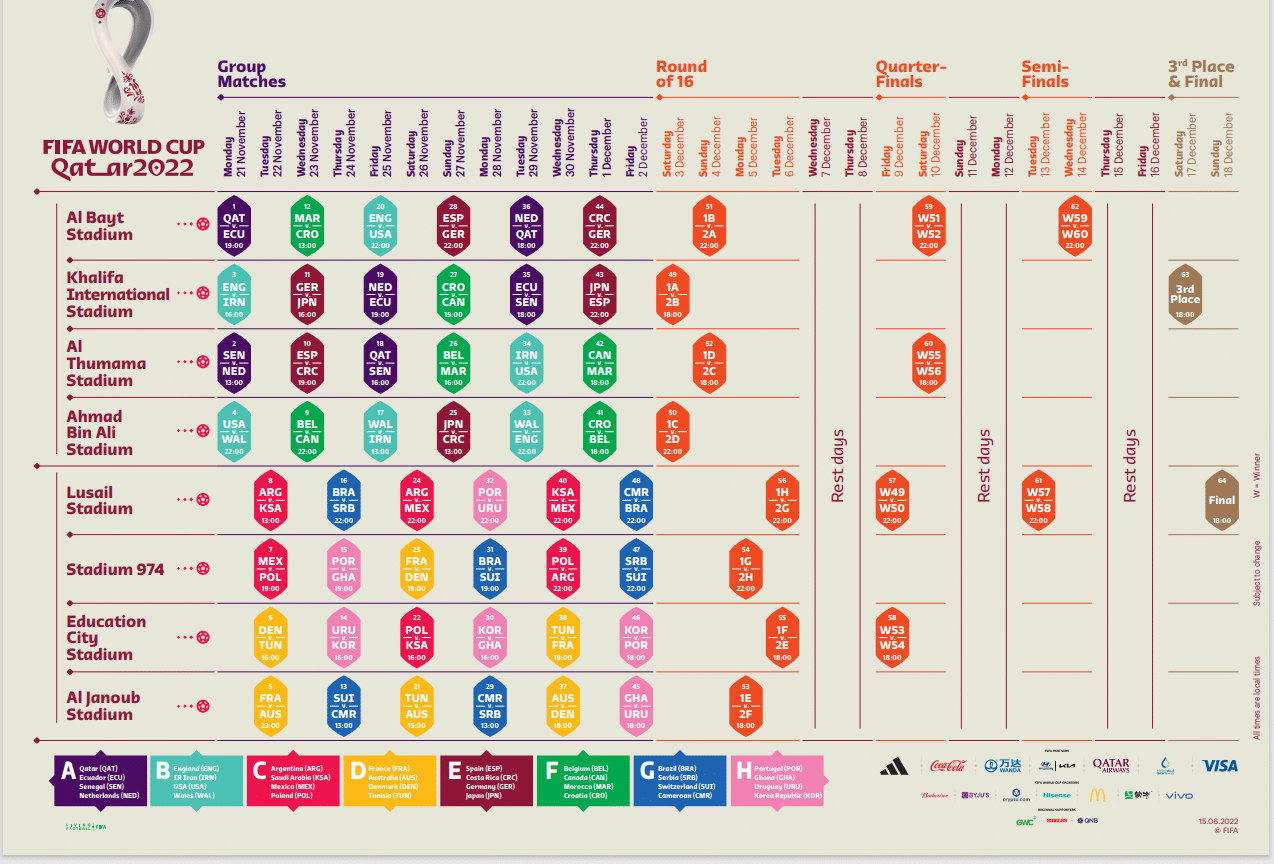 One can obtain World Cup 2022 tickets through the official FIFA website. However, fans will need to register an account on FIFA’s ticket portal. The tickets for the matches are being sold on a first-come-first-serve basis. Therefore, meaning that whoever buys the tickets first gets them first. There are no reservations per se. According to FIFA, however, 1.8 million match tickets have already been sold in the first two sales batches.

Sony Six and Sony Six HD is to broadcast live coverage of FIFA World Cup 2022 in India and its subcontinent (Sri Lanka, Bangladesh, Bhutan, Maldives, Pakistan, and Nepal) countries. You can also live stream these matches on SonyLiv (website, App).

What’s New In This Season

Which country will host FIFA 2026?

The 2026 FIFA World Cup, will be the first tournament to be hosted by more than two countries. Canada, the United States, and Mexico will co-host the upcoming world cup. Three-quarters of the games will happen in the U.S., including the final.

Being the host nation, Qatar will automatically qualify for the world cup.

When did they announce Qatar 2022?

On December 2, 2010, FIFA announced that Qatar will host the 2022 FIFA World Cup, bringing the world’s most prestigious tournament to the Middle East for the first time in the tourney’s 92-year history.

What will happen to Qatar stadiums after the World Cup?

Ras Abu Aboud Stadium in Doha will be the first fully demountable FIFA World Cup stadium. However, Qatar’s proposal is to donate demountable grandstand seats to countries in need of sporting infrastructure. Therefore, supporting the creation of a strong legacy of football development.

The 2026 world cup will occur according to the new FIFA rules. Instead of having eight groups of four teams, there will be 16 groups of three teams. Each team will play each other once in the group stage and the top two teams will progress to the first knockout round. In the existing format, the knockout phase begins with just 16 teams but from 2026 it will start with 32 nations.