Who is Kyle Larson?

Kyle Larson is a World of Outlaws sprint car team owner and a professional sprint car racer. He is a full-time NASCAR Cup Series driver for Hendrick Motorsports. Also, he drives the No. 5 Chevrolet Camaro ZL1 1LE. Kyle also races for the No. 6 Rumley Motorsports team in Dirt Late Models. In addition, he also drives the No. 57 Paul Silva Motorsports team in 410 Winged Sprint Cars. He competes in all of these weekly. Kyle had a highly successful dirt track racing career before and throughout his stock car racing career. Besides, he also appeared in the 2017 film Logan Lucky in a cameo role as a limo driver. Moreover, Kyle Larson has won numerous honors in his career. No wonder he has emerged as the public’s favorite sports personality.

You are welcome to peek into the life of the auto racing driver. Henceforth, tune in to read about Kyle Larson’s biography in detail. Also, if you would like to visit his website, then click here.

Born in Elk Grove, California, USA, Kyle Larson’s date of birth is July 31, 1992. His name at birth was Kyle Miyata Larson. In terms of his nationality, he is an American citizen who practices Christianity. Kyle has recently turned 30. His zodiac sign is Leo.

Kyle Larson is the son of Mike Larson and Janet Larson. His mother is of Japanese American descent, and her parents spent time in a Japanese internment camp during WWII. Andrea Larson is Kyle’s younger sister. Likewise, his academic qualifications are not available on the Internet. 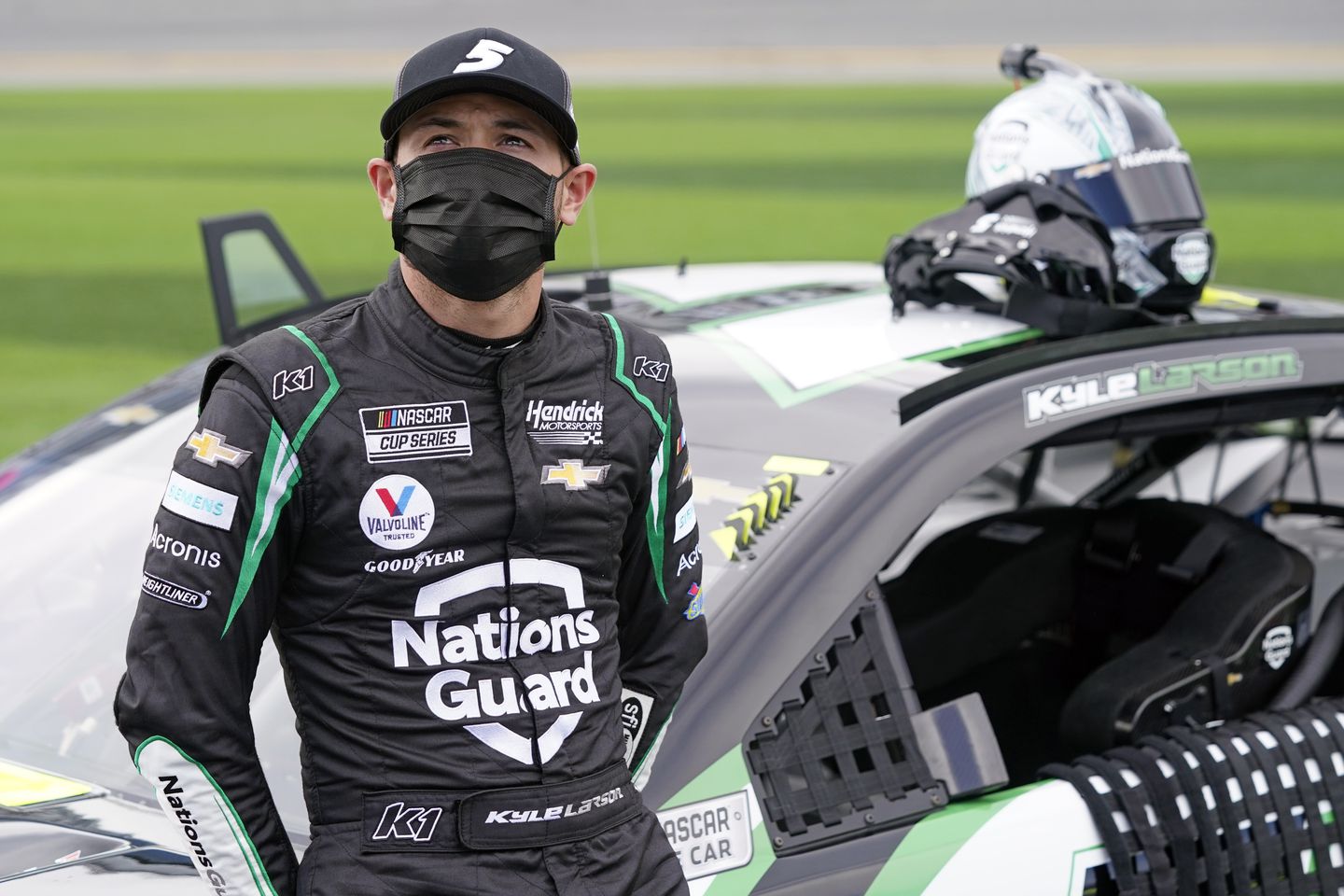 Only a week after his birth, Kyle Larson joined his first race with his parents. He began his racing career in outlaw karts in Northern California, when he was just seven years old. He raced open-wheel vehicles in his teenage years. Some of them included USAC midgets, Silver Crowns. Besides, he also drove sprint cars for Keith Kunz Motorsports and Hoffman Racing, all of which had Toyota sponsorship. In addition, he raced in World of Outlaws sprint cars.

At Placerville Speedway, Kyle won his first sprint car race. At that time, he was one of the youngest drivers ever to take part and compete. He won the 2011 4-Crown Nationals at Eldora Speedway in three different types of USAC cars. Thus, he became the second driver in history to perform the feat in a night.

Kyle Larson won two Silver Crown races in 2011 and was named Rookie of the Year in that series. Further, he also won six USAC National Midget races in 2012, including the Turkey Night Grand Prix. Kyle was at the pinnacle of his career. Nevertheless, he did not give up open-wheel racing for midweek events in New Zealand. Moreover, in the NASCAR Nationwide Series, he began driving the No. 32 Chevrolet Camaro. He drove it full-time for Turner Scott Motorsports in 2013. Furthermore, he was the winner of the North Carolina Education Lottery 200 in 2013.

Kyle drove the No. 42 for GCR on a part-time basis in 2016. He was racing at Charlotte Motor Speedway at the time. Besides, he also ran Joey Logano with 15 laps to go and almost won. However, an incident occurred with 2 laps to go, and he lost.

In 2017, he competed in 11 Xfinity races and won at Auto Club Speedway after holding off Joey Logano. At Richmond International Raceway, Kyle claimed the checkered flag. Additionally, he won the Dover race after guiding 137 laps. Nonetheless, before the start of the 2019 season, he lost his first sponsor, DC Solar. This took place after the FBI raided the company’s headquarters. Furthermore, Kyle started the 2020 season with a seventh-place finish at Daytona International Speedway.

Kyle Larson had agreed to drive the No. 24 trucks in the 2020 Homestead event for GMS Racing. Kevin Harvick prompted the collaboration by offering a prize to full-time Cup drivers who could beat Kyle Bush. However, GCR fired Kyle Larson on April 13. This was due to a report that arose at an iRacing match the day before. He remarked, “You can’t hear me?”. “Hey, nigger,” he said in the live stream, fearing he had lost touch. Kyle was unable to hear his spotter on his headset. Henceforth, he used a racist term to get the attention of his teammates.

Several corporations including McDonald’s, Credit One Bank, and Chevrolet, turned down sponsorship offers for Kyle. In the process, he also received a lot of backlash on social media. Moreover, CGR dismissed him the next day. Also, Kyle was suspended from NASCAR until September 2020.

Nonetheless, Kyle Larson published an essay on his website in October 2020, after some months on social media. Likewise, he apologized for using the slur in his essay and denied it to be emblematic of who he was.

Larson stated in the statement that he experienced people who uttered the slur regularly while racing overseas. He admitted to taking responsibility for his misconduct, including his suspension and firing from CGR. Additionally, he claimed that despite completing sensitivity training, he worked a lot to improve his behavior. Further, days following George Floyd’s death, he headed to Minnesota. There, he took part in a variety of programs to learn more about the African-American community. Kyle also stated that he hoped his setback would serve as a “lesson for everyone”. He also exclaimed about working hard to seek reinstatement in the Cup Series status. Furthermore, Kyle Larson is attempting to redeem himself in front of his fans before returning to racing in 2021.

A stellar performance throughout his car racing career has brought several accolades to Kyle Larson. Thereupon, let us take a quick look at all his accomplishments to date. 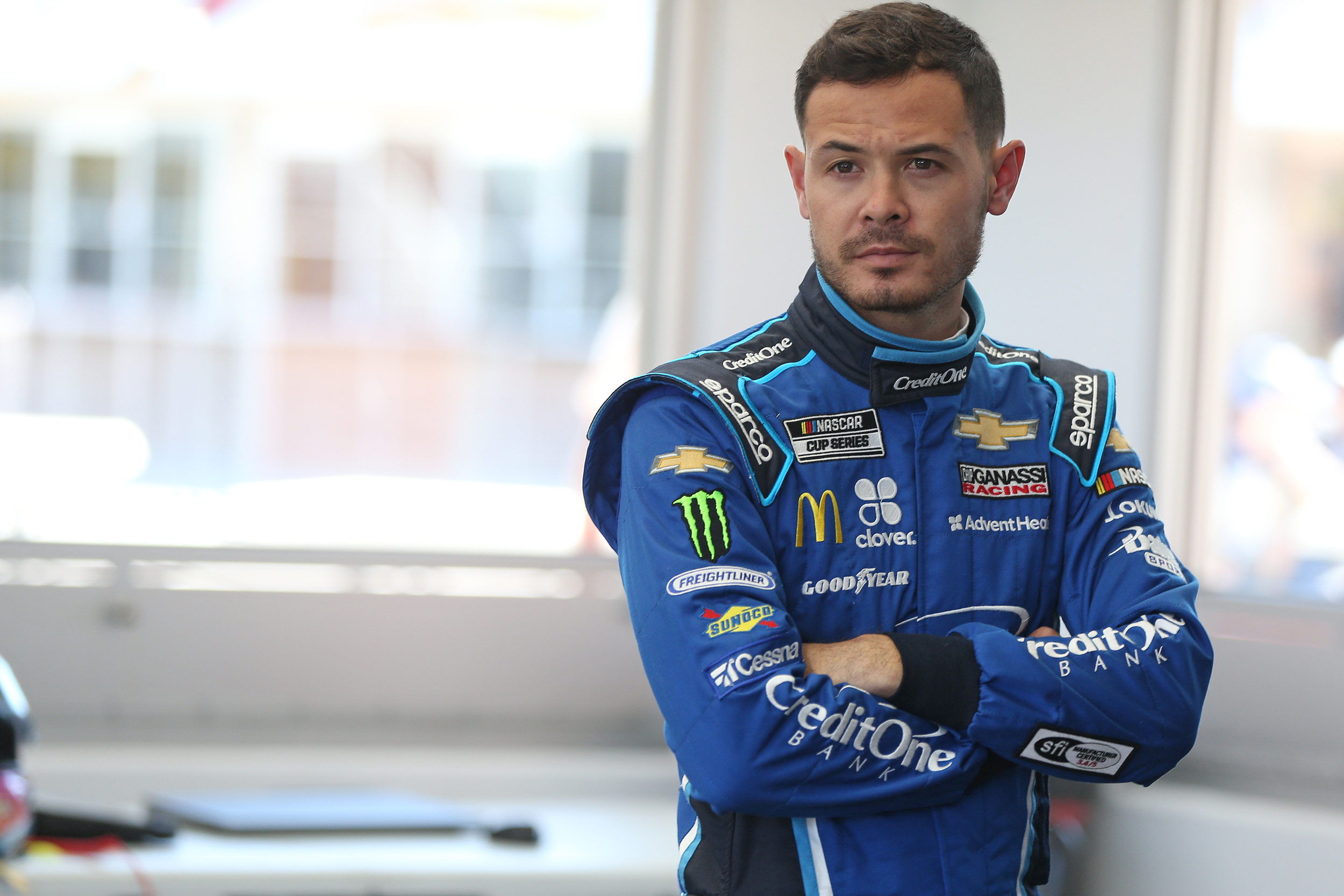 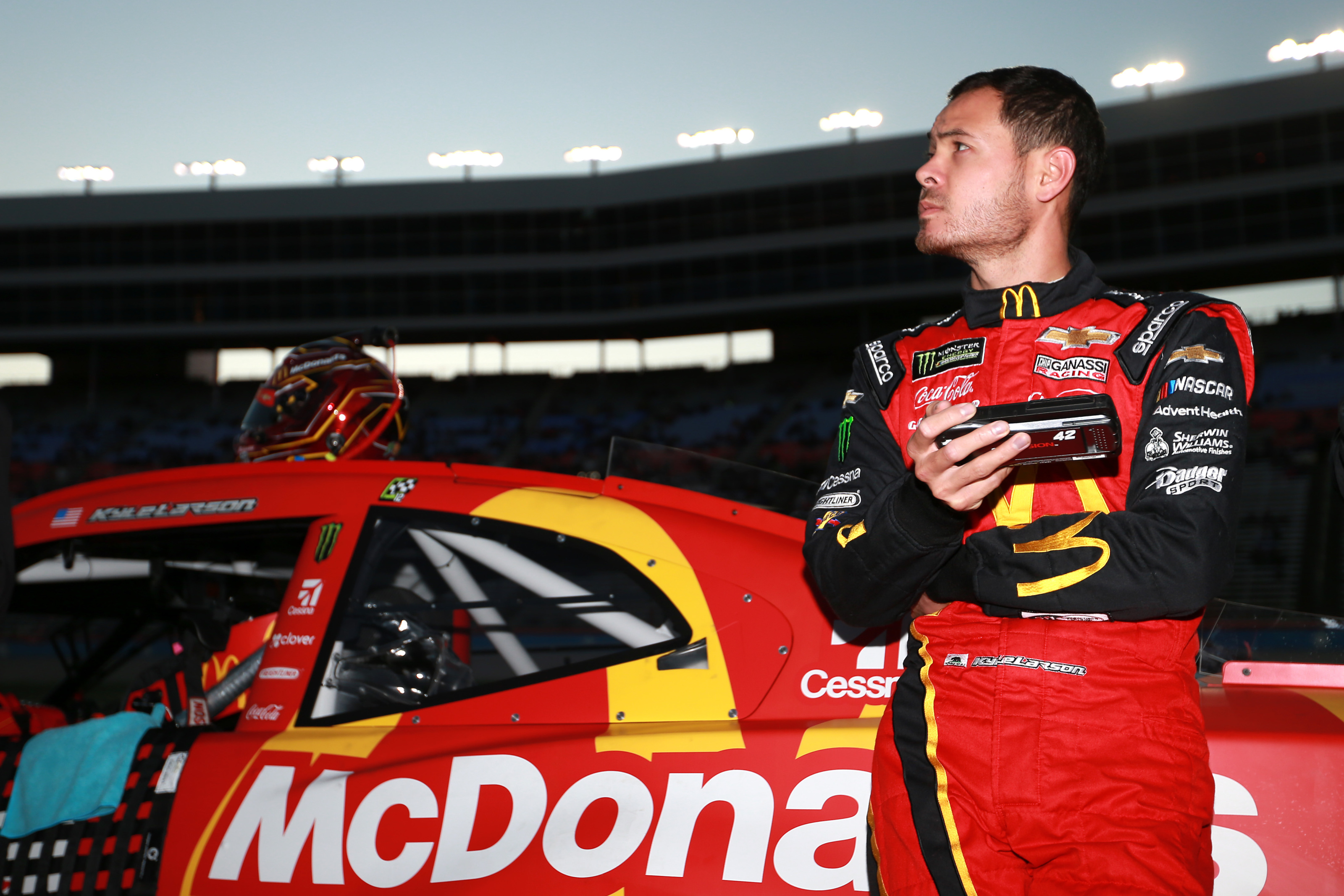 Kyle Larson is a wealthy man with a handsome net worth of $15 million. Between June 2018 and June 2019, he made around $9 million. Overall, his hefty salary and winning prizes contribute to the majority of his income. That is enough to place him among the 10 highest-paid NASCAR drivers in the world. He has raced in the Monster Energy NASCAR Cup Series, NASCAR Camping World Truck Series, and NASCAR Infinity Series. Kyle also owns a World of Outlaws sprint car team along with Carson Macedo.

When talking about his relationship status, Kyle Larson is married. He married his girlfriend, Katelyn Sweet on September 26, 2018, after their engagement on December 22, 2017. Kyle’s better half, Katelyn Sweet is the sister of World Of Outlaw sprint driver and NASCAR racer Brad Sweet. 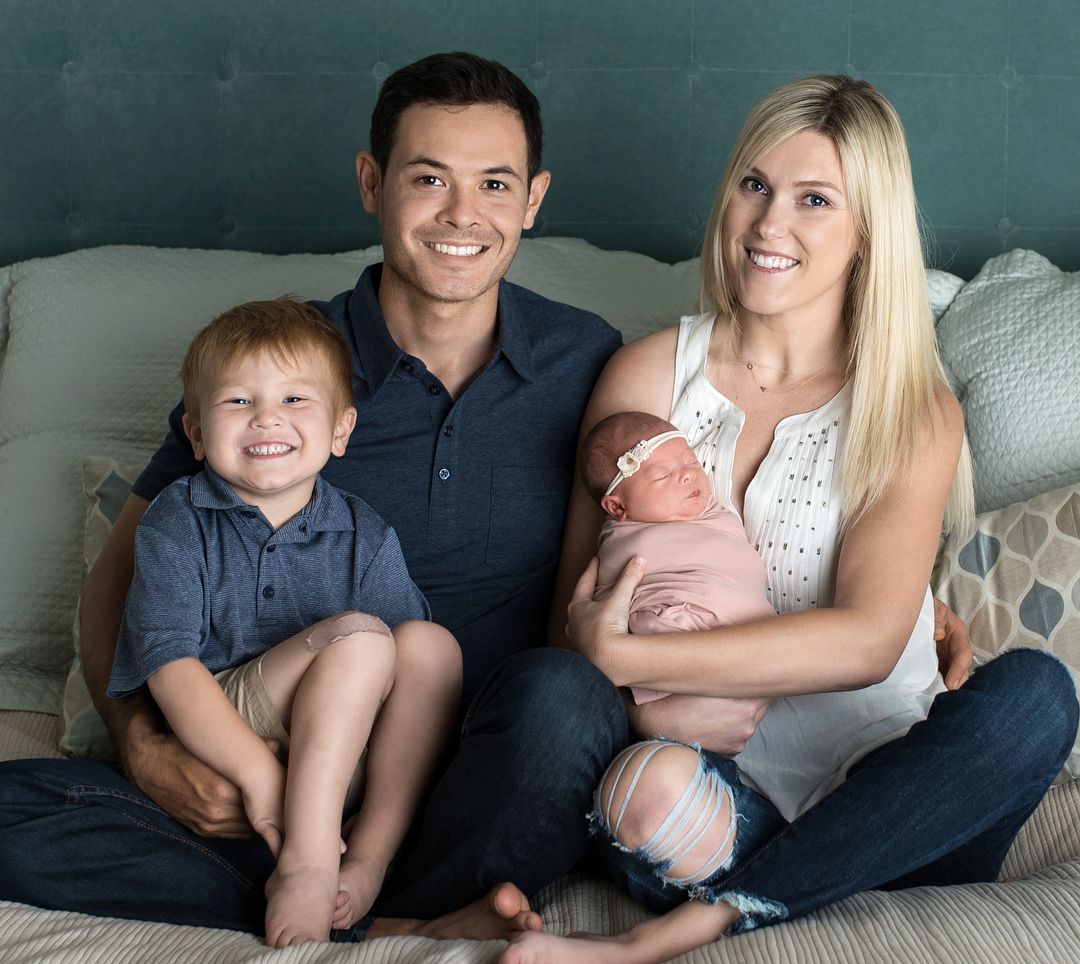 On June 13, 2014, Kyle and Katelyn announced they were expecting a kid. Subsequently, Kyle declared on July 16, 2014, that Katelyn was pregnant with a baby boy. Finally, the baby’s birth took place on December 22, 2014. The couple named their beautiful son Owen Miyata Larson.

Further, Kyle and Katelyn revealed the good news on social media on November 8, 2017. They exclaimed to be pregnant with their second child, due in May 2018. So on May 7, 2018, Katelyn gave birth to a healthy daughter and named her Audrey Layne Larson.

In his leisure, Kyle enjoys playing golf and spending time with his wife, Katelyn, and children, Owen and Audrey. Nonetheless, the couple prefers to keep their relationship under the wraps.

The Kyle Larson Foundation by Kyle is committed to bringing people together. Further, it also supports grassroots philanthropic groups that help today’s youngsters, families, and communities. Moreover, Kyle is an active supporter of the Urban Youth Racing School in Philadelphia. Specifically, this school helps to expose children of color to motorsports. Besides, he is also an advocate for the Sanneh Foundation in St. Paul. In particular, the foundation helps low-income urban and immigrant youth in the Twin Cities. Additionally, after joining Hendrick Motorsports, Kyle has added Hendrick Cares as the third key organization for aid. Coupled with the Kyle Larson Foundation, he meaningfully contributes to Hendrick Cares.

When it comes to social media, Kyle Larson appears to be quite active. He solely uses Facebook. He has more than 360K followers on Facebook. Kyle is not present on any other social media platforms, such as Instagram or Twitter. He is more concerned with his career than with using social media. 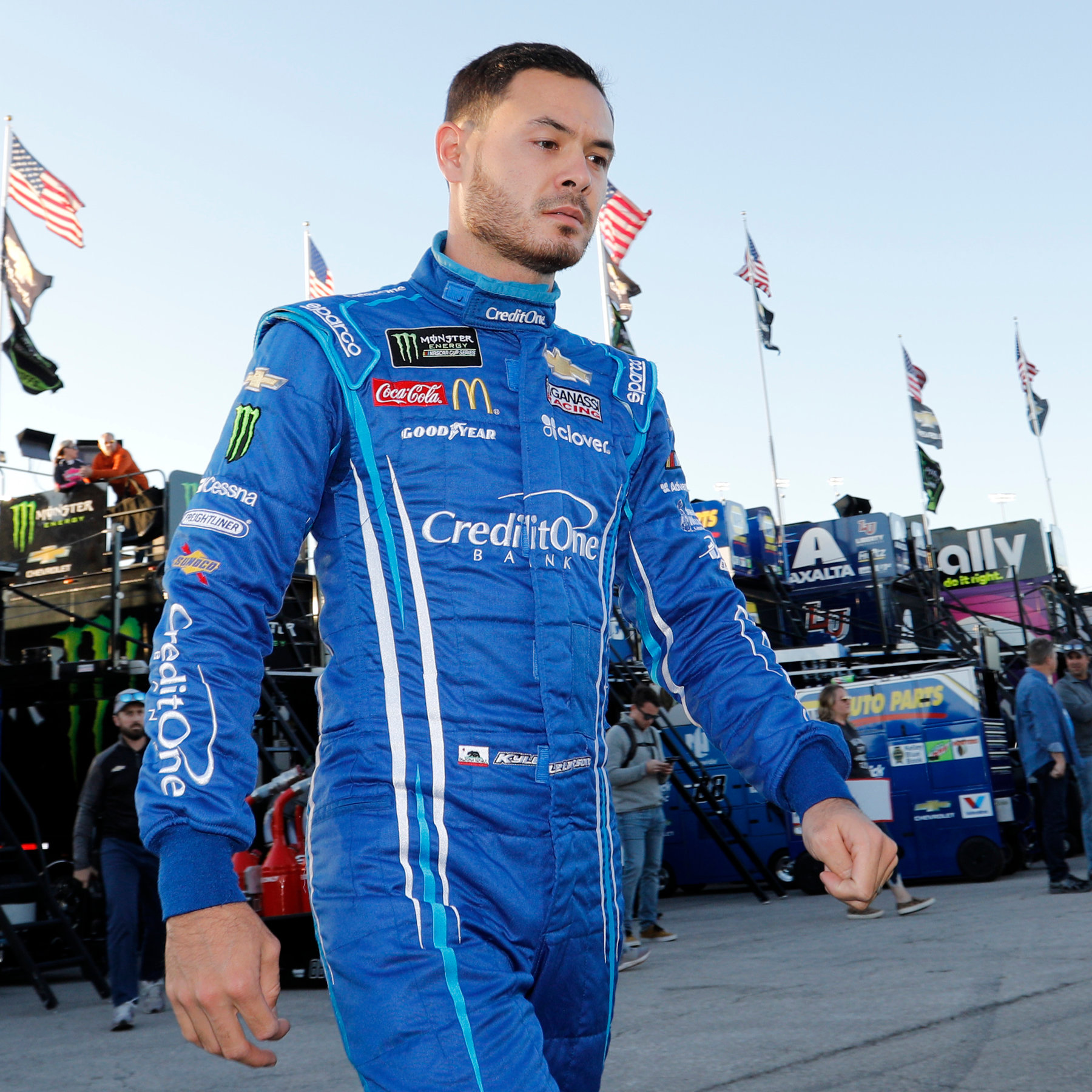 Kyle Larson’s height and weight are 5’6″ and 61 kg, respectively. Kyle’s most distinguishing characteristics are his beard and mustache. Kyle is a black-haired man with dark brown eyes. Furthermore, additional information about his body is currently unavailable. However, he has a stout and healthy body type as a racer.

Therefore, we bring to you a compiled list of the most popular facts regarding Kyle Larson on the web. 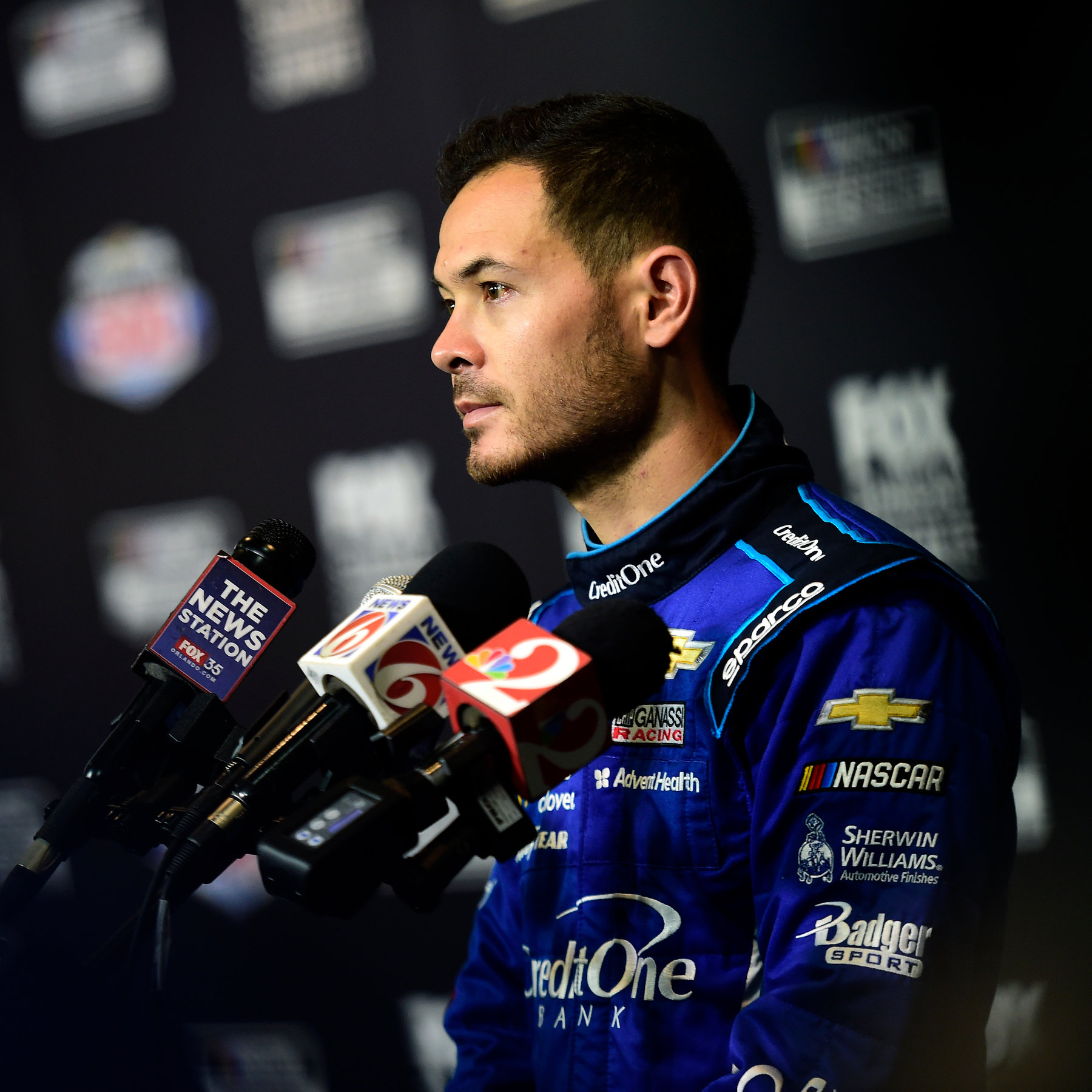 Currently, Kyle is 30 years of age. He turned 30 last month.

When Kyle was born, he was named Kyle Miyata Larson.

He is biracial. While his father is American, his mother is Japanese-American.

His parents are Mike Larson (father) and Janet Larson (mother).

The sprint car racer married his longtime beau, Katelyn Sweet in a pompous ceremony. While their engagement took place on December 22, 2017, they exchanged wedding vows on September 26, 2018. And they have been happily living ever since.

The 2020 Chili Bowl Nationals Champion has a son and a daughter with his beautiful wife. While their son’s name is Owen Miyata Larson, their daughter is Audrey Layne Larson. Both the children were born before the duo became man and wife.

Hardly any information is available on the Internet about Kyle Larson’s education. However, as per some sources, Kyle has completed his schooling at the Pleasant Grove High School, Elk Grove City.

You can visit the link here if you would like to check out exclusive merchandise by Kyle Larson. Altogether, he sells a wide range of merchandise, some of which are as follows:

The celebration was short though. He boarded Denny Hamlin’s jet shortly. He returned to Indianapolis for the August 15 Cup race at the Indianapolis Motor Speedway road circuit.

Overall, Kyle Larson had a fantastic week with an amazing atmosphere. He also won the Cup race at Watkins Glen International the prior weekend. Likewise, Kyle Larson achieved these wins after a prolonged period of suspension.