Germany’s national team and Bundesliga club Bayern Munich both have Thomas Muller as a pro football player. He is a versatile player who can play either as a midfielder or forward. Besides, he has been in a variety of attacking situations. Likewise, they include attacking midfielder, second striker, and center forward, on either wing or even central midfielder.

Muller has thus gained fame for his positioning, teamwork, strength, and work ethic. Additionally, he has also steadily scored and assisted in creating goals. At present, people regard him as one of the best midfielders in the world. Due to his flawless positional awareness, he is also hailed as one of the best off-the-ball players of all time. Moreover, plenty of his other abilities make him one of the game’s most effective attacking players.

If you would like to know more about this popular male athlete, you are most welcome here. Further, we shall be covering the personal life and career of Thomas Muller in brief. Thus, scroll over and read along to know more.

Muller’s birth took place in Weilheim in Oberbayern, Bavaria on September 13, 1989. He grew up in the neighboring village of Pahl, which gained media attention as a result of his World Cup success. In addition, Muller has a brother who is two and a half years younger than him – Simon. Moreover, his parents are Klaudia and Gerhard (Gerd). He is Roman Catholic.

After two years of courtship, Muller wed Lisa Trede, his longtime beau. She is a model and an equestrian working on a farm. 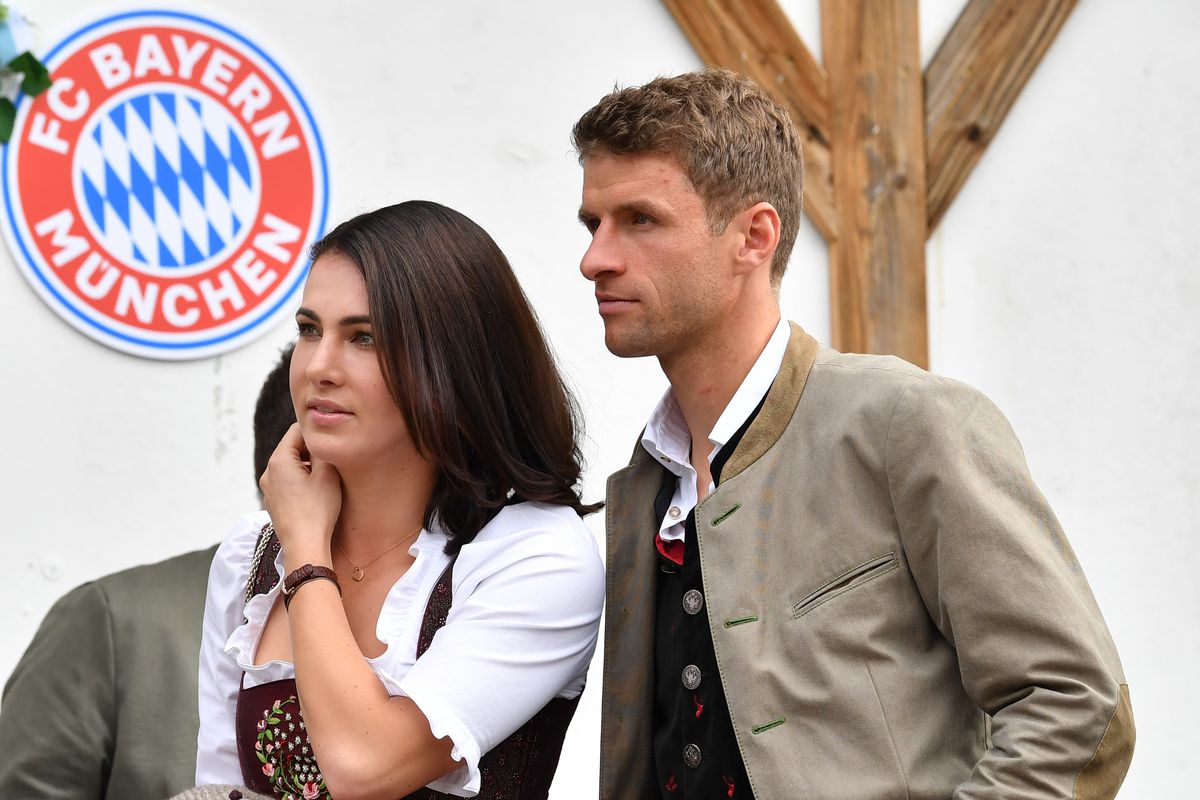 The duo had met in 2006 when they were both 17 years of age. Eventually, love bloomed between them. He got down on one knee in front of her parents’ house on Christmas Eve two years later. After waiting for nearly a year, they exchanged vows in 2009 at the Ismaning registrar’s office in Germany. Afterward, they rejoiced in their close circle though.

Moreover, Muller has a strong fondness for luxury sports cars. Henceforth, you can spot brands such as Audi, BMW, Ferrari, Maserati, and Nissan in his collection.

Nonetheless, he joined the YoungWings charity’s ambassador program as an agent in June 2011. It aims to support children and young people who have experienced trauma or loss.

Muller began playing with TSV Pahl when he was only 10 years of age and carried on for 7 seasons. Further, he joined the local Bundesliga team Bayern Munich in 2000. Pahl had 165 goals in one of the seasons, and Muller alone was responsible for 120 of those goals.

Moreover, he made progress through the youth system, and in 2007 he stood second in the Under-19 Bundesliga. In March 2008, however, he scored his first goal. It came while playing for the reserve squad against SpVgg Unterhaching in a Regionalliga game. He advanced through the younger divisions before facing Jürgen Klinsmann in his first competitive match.

Muller made his first appearance for Jurgen’s first-team Bayern Munich during the pre-season friendlies. He made his debut on August 15, 2008. That was when he replaced Miroslav Klose for the final 10 minutes of the match against Hamburger SV.

Furthermore, Joachim Low, the head coach of Germany, called him for a friendly match on March 3, 2010. He made his debut against Argentina in the 66th minute, thus replacing Toni Kroos in a 1-0 loss for Germany.

In addition, he appeared in three other games that year. On March 10, 2009, Muller replaced Bastian in the 72nd minute of the match against Sporting CP. Therefore, this gave him his Champions League debut.

Muller and his reserve teammate Holger received a two-year deal in February 2009 to play for Bayern Munich’s first squad. Moreover, he advanced under Louis van Gaal. The latter selected him for all of Bayern Munich’s 2009-10 Bundesliga games and the UEFA Champions League final. Finally, Inter Milan won there. Muller entered the game against Bosnia and Herzegovina in the final warm-up match of the 2010 FIFA World Cup. However, note that he was a halftime substitute.

Muller made his World Cup debut for Germany and added the third goal to the team’s 4-0 victory over Australia. Further, he scored once again in the Round of 16 match against England and again when Germany defeated Argentina 4-0. However, he was barred from playing in the semi-final game against future tournament champion Spain. He scored against Uruguay in the third-place match at the 2010 World Cup, thus earning the Golden Boot. Moreover, with five goals and three assists, Muller also took home the tournament’s Best Young Player Award. 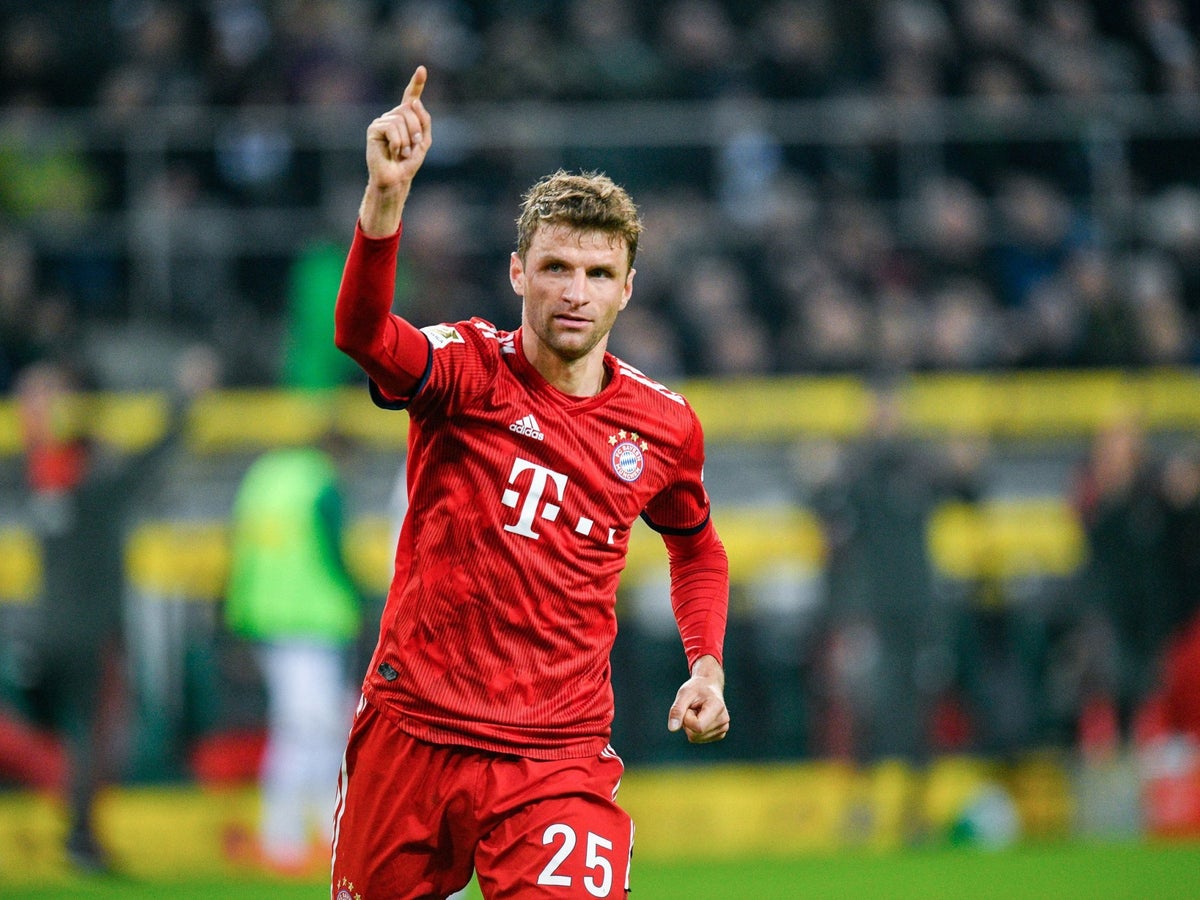 Additionally, Muller played a key role in the match where Bayern won a historic treble. It was the 2012-13 campaign, where the team alone scored 23 goals.

Muller received the Man of the Match honor on June 16, 2014. That match saw Germany defeating Portugal 4-0 in their opening match of the 2014 FIFA World Cup. Well, Muller had scored a hattrick in the victory and scored five goals during the entire tournament. He scored the first goal against Brazil in the FIFA World Cup of 2014. Thus, this secured Germany’s 7-1 semi-final victory. 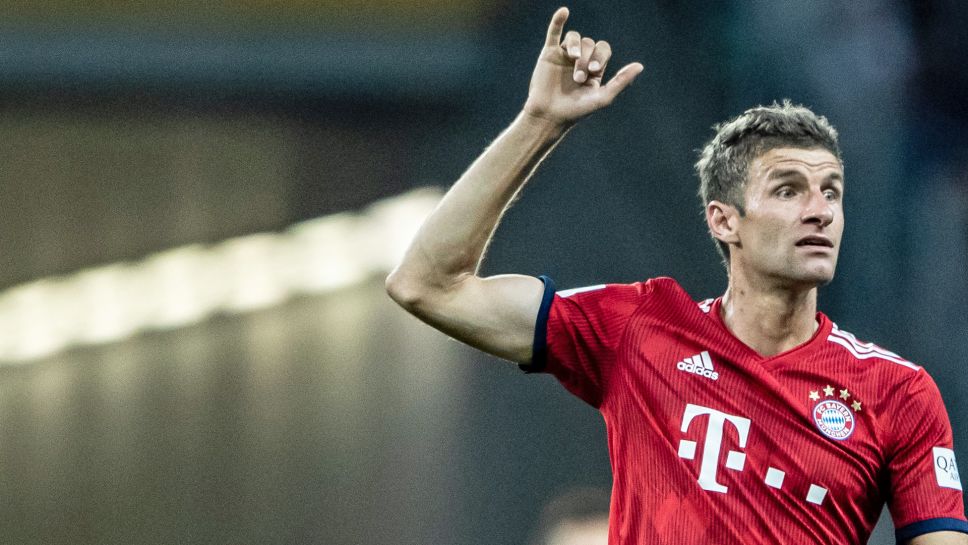 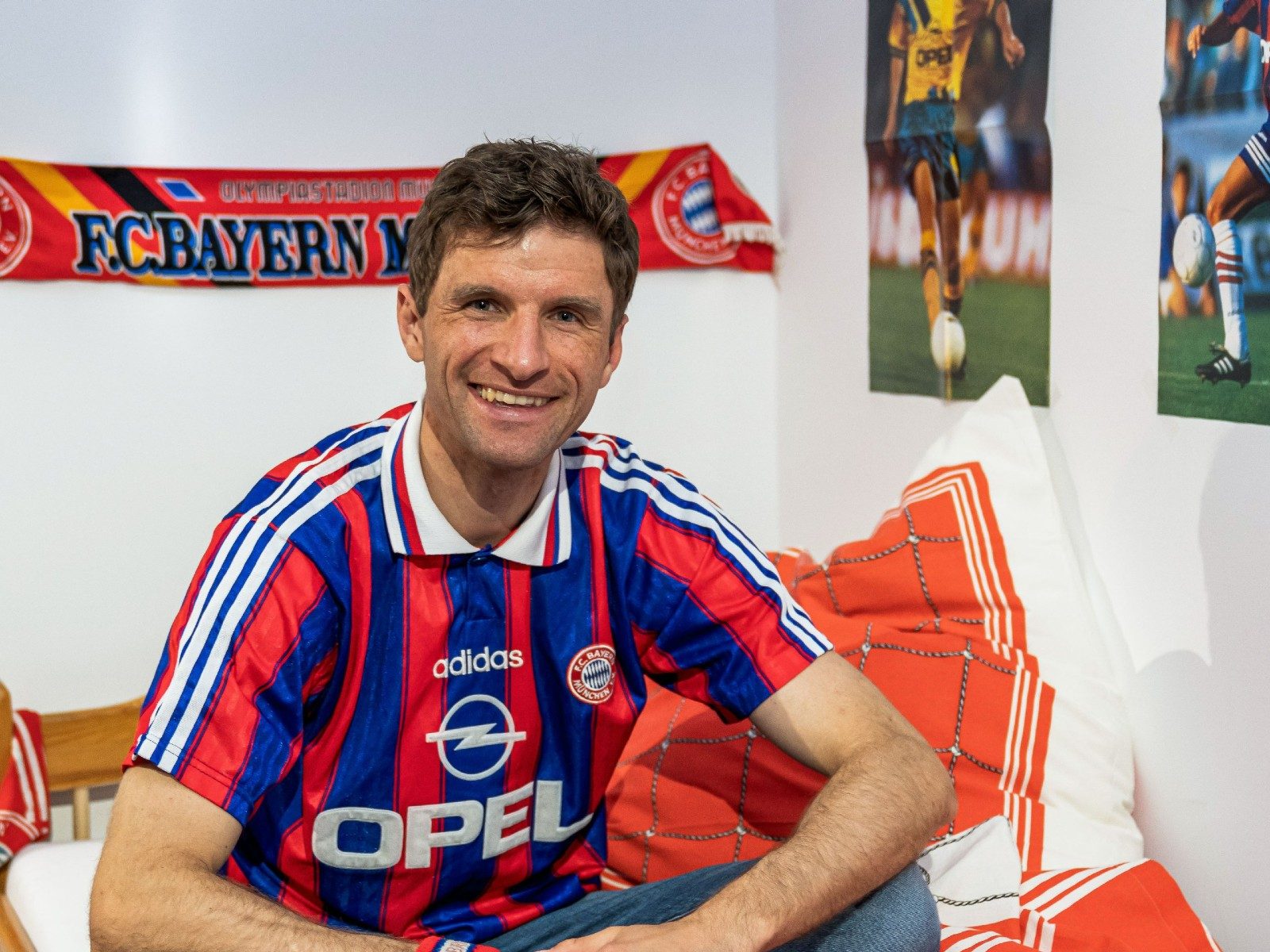 Joachim Low, the manager of Germany, included Muller in the final 23-man roster for the 2018 FIFA World Cup. Well, Muller took part in all three of Germany’s matches against South Korea, Sweden, and Mexico. When South Korea was playing, he entered the game as a substitute after starting against Mexico and Sweden. For the first time since 1938, however, Germany ended up getting eliminated from the World Cup in the group stage. Shockingly, Muller had failed to score a single goal in that tournament.

Muller scored against Porto on April 21, 2015. Therefore, this made him the German player with the most goals in the UEFA Champions League. Additionally, in three different seasons, he was the DFB-top Pokal scorer. 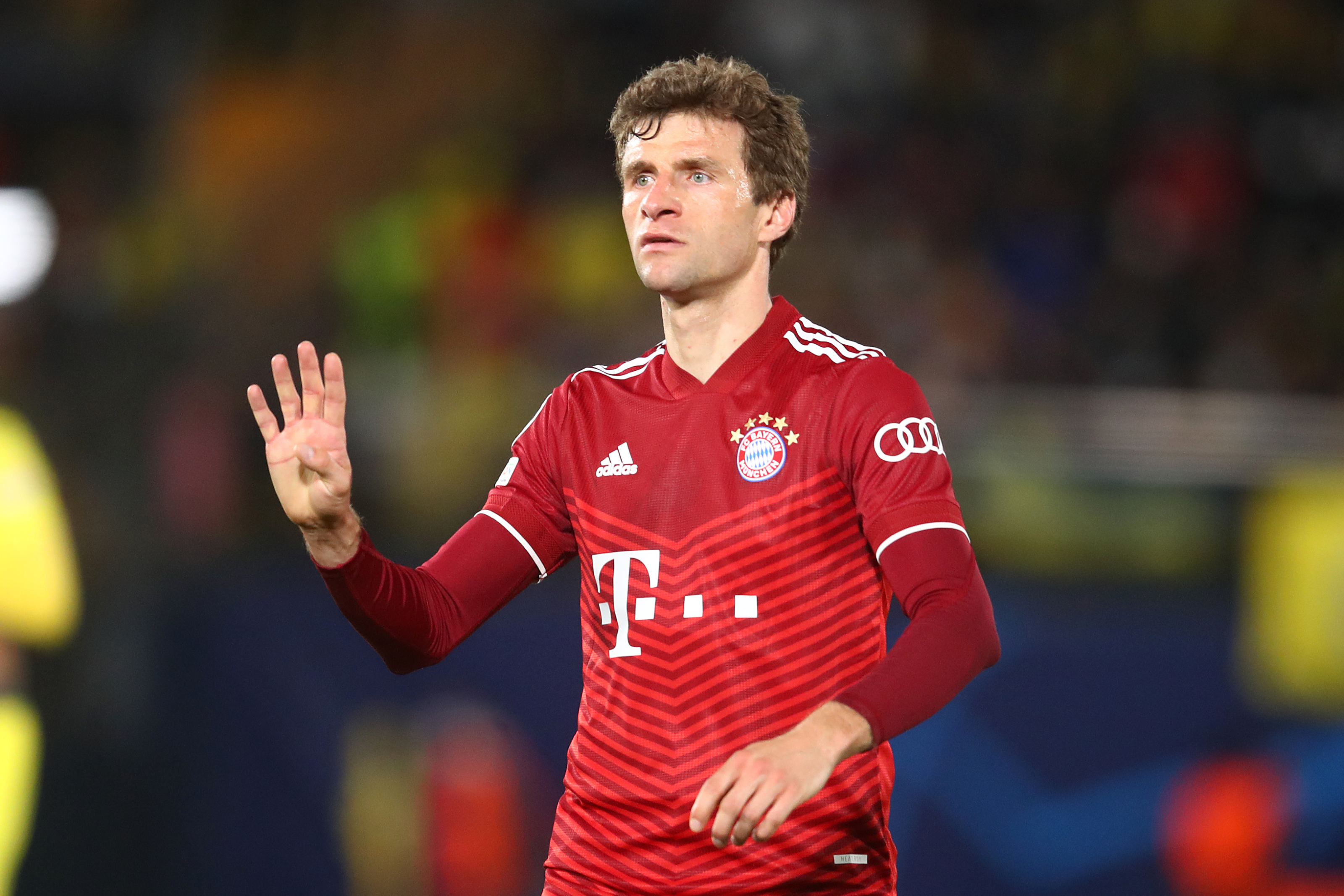 The German footballer receives a hefty salary from Bayern Munich of about €250K each week. Moreover, reports assert that Thomas Muller’s net worth is around $55 million, as of 2022. Well, Muller could have easily moved to other teams in a high-paying move that would greatly boost his net worth. However, he still opted to stay and play for his hometown team. Thus, he succeeded in proving incredible loyalty and repaying the club’s and the people’s faith. 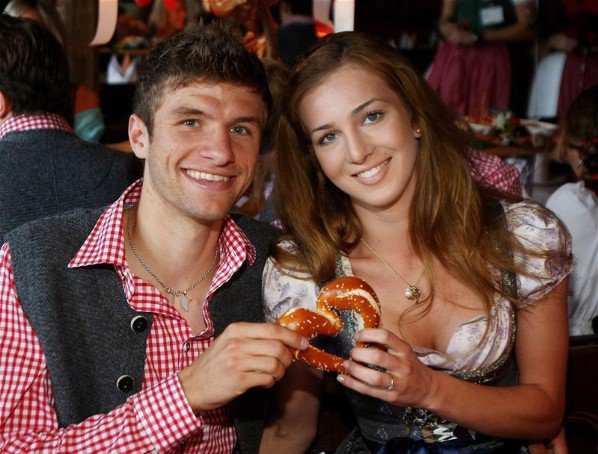 One of the most prized athletes in Germany, Muller also has a long list of endorsement deals to his credit. These include brands like Adidas, Procter & Gamble, Gillette, Rewe, Volkswagen, Barilla, and Weber-Stephen among others.

Who is Thomas Muller?

German football player Thomas Muller plays forward and serves as vice captain of Bayern Munich. He is popular for his superb precision and goal-scoring prowess. Muller possesses excellent placing, crisp passing, and awesome dribbling skills. Moreover, he has also played for U-19 and U-21 teams. Besides, he has received the Bundesliga Player of the Month award in the Champions League due to his efforts. In addition, he has also received other honors, including the Golden Boot, Best Young Player, and Silver Boot. Likewise, The Guardian recognized him as the fifth-best player across the entire globe.

How old is Thomas Muller?

The ex-Lazio man is currently 32 years of age.

What is Thomas Muller’s salary?

Muller is one of the most marketable athletes in the world. His annual salary is presently around $18.4 million, as per many sources. Additionally, he makes more than $30 million per year through endorsement deals with various brands.

Why is he called the Raumdeuter?

Thomas Muller coined the nickname ‘Raumdeuter’ for himself in 2011 to describe his special position at Bayern Munich. The term translates to “space interpreter” in English. Likewise, it describes his immense talent for spatial awareness and intuition.

How tall is Thomas Muller?

How much does Thomas Muller weigh?

When he participated in every domestic league game during the 2009-10 season, Louis Van Gaal made the most of Muller. In August 2012, he scored his first Bundesliga goal of the year against SpVgg Greuther Furth.

The Bayern forward has scored 10 World Cup goals to date.