Kevin Durant is an NBA basketball player from the US. While only in his early 20s, he has exhibited himself as one of the best players of his time. He is presently a member of the National Basketball Association’s Brooklyn Nets. Durant has received numerous honors, including two NBA Finals MVP Awards and two Olympic gold medals. His greatest achievement as a professional basketball player occurred at the 2012 Olympics. There, he managed to break the record for total points scored in an Olympic basketball tournament. He won the NBA Championship twice in a row while playing for the Golden State Warriors. Moreover, Durant’s name was included on Time magazine’s 2018 list of the 100 Most Influential People.

If you would like to know more about this iconic basketball star, then you are in the right place. Scroll down to take a detailed look at Kevin Durant’s life and career. 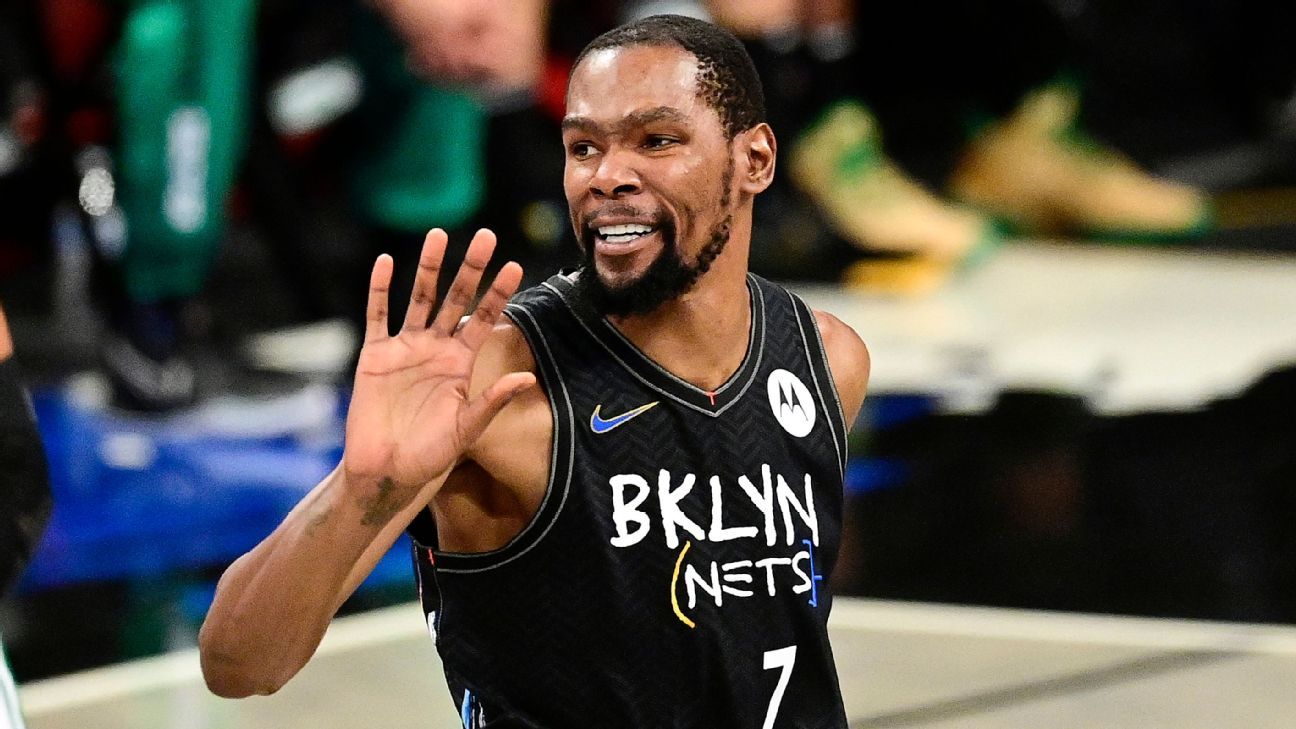 Born on September 29, 1988, in Washington D.C., his actual name was Kevin Wayne Durant. His parents were Wanda and Wayne Pratt. However, Durant’s father deserted the family while he was still an infant. Wanda and Wayne subsequently divorced. Furthermore, the little Durant was raised by his mother and grandmother, Barbara Davis. He has two brothers – Tony and Rayvonne, and a sister – Brianna. Nevertheless, during his teenage years, Durant’s father returned to his life. Moreover, he also took Durant along to basketball events across the country.

Durant and his siblings grew up on the outskirts of Washington, D.C., in Prince George’s County, Maryland. From an early age, he was unusually tall, reaching 6 ft. while still in middle school. However, he was often teased for his height. Nonetheless, his grandma always cheered for him. She would assure that his height was a blessing and it would definitely aid him in his sports career. He aspired to play for his favorite team, the Toronto Raptors, as a kid. Additionally, his favorite player, Vince Carter, was on the squad. He was a member of many AAU basketball teams in the Maryland area. Besides, he played there alongside future NBA stars Michael Beasley, Greivis Vásquez, and Ty Lawson. He started wearing #35 as his jersey number at this period in honor of his AAU coach, Charles Craig. Craig was unfortunately murdered at the age of 35.

Durant attended the National Christian Academy and the Oak Hill Academy. Likewise, he was a standout basketball player at both schools. For his final year, he switched to Montrose Christian School. He was 6’7″ tall at this point.

Further, for additional education, he enrolled at the University of Texas. There he won the Oscar Robertson and Adolf F Rupp prizes for his superb performance during his first year. He qualified for the NBA draught after just a year of college basketball due to his terrific skills.

Kevin Durant’s scoring skill is his most well-known trait. He won 4 scoring titles between 2010 and 2014. Therefore, he became one of the just two players in history to do so in five years. His playing style was isolation-driven early in his career. Nonetheless, he quickly grew into a potent off-ball player who could score from the outside as well. By 2013, he was shooting at a strikingly high rate. Thus, this allowed him to join the 50-40-90 club, consisting of only 9 members. When Durant joined the Warriors in 2016, he was able to impact the offense in a variety of ways. Conversely, this allowed him to stay effective and improve an already elite offense. 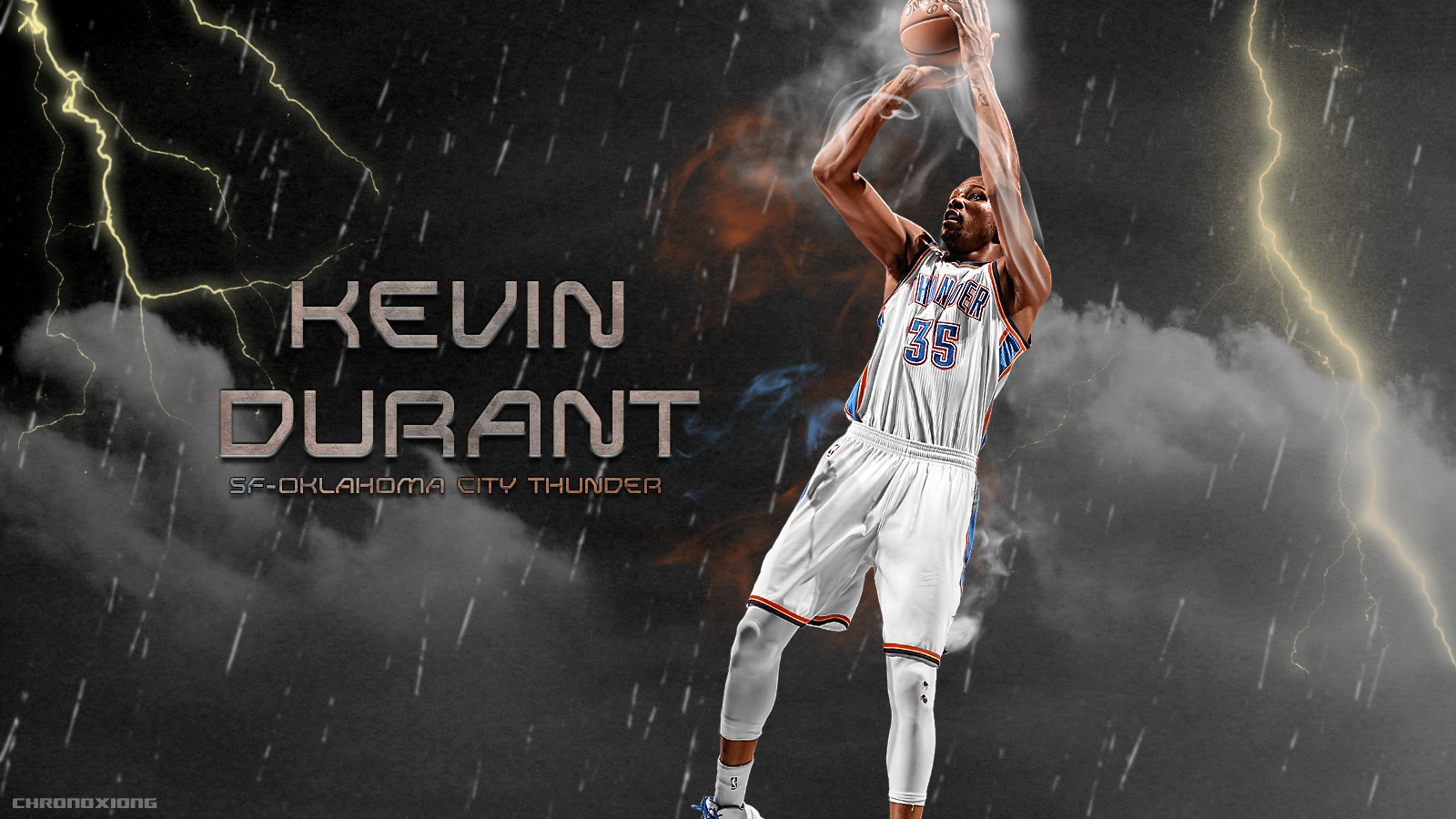 Durant’s slender build, defense, and passing received criticism early in his career. From 2010 to 2014, he improved as a playmaker, thus boosting his assist totals every year. However, his overall vision lagged behind that of the league’s finest passers. Moreover, in 2014, he showed defensive progress. Durant became a more reliable off-ball defender and rim protector after joining Golden State.

Kevin Durant began his professional career after getting selected by the Seattle SuperSonics in the 2007 NBA draft. In his first game against the Denver Nuggets, he had 18 points, 5 rebounds, and 3 steals. Further, on November 16, he made his first match-winning shot in his career against the Atlanta Hawks. Subsequently, his prowess earned him the NBA Rookie of the Year award.

His team moved from Seattle to Oklahoma City the following season, becoming the Oklahoma City Thunders. Durant’s scoring average soared by five points from the last season by the year-end. In addition, he was a finalist for the Most Improved Player Award. However, he finished third.

Furthermore, Kevin Durant received a nomination for the 2012 Olympics after a couple of years. Besides setting the record for total points scored in an Olympic basketball tournament, he also helped his team win gold.

Conversely, Durant returned to the national squad at the 2016 Olympics. And once again, he helped the team earn another gold medal. Along with Carmelo Anthony, he was named the 2016 co-USA Basketball Male Athlete of the Year. 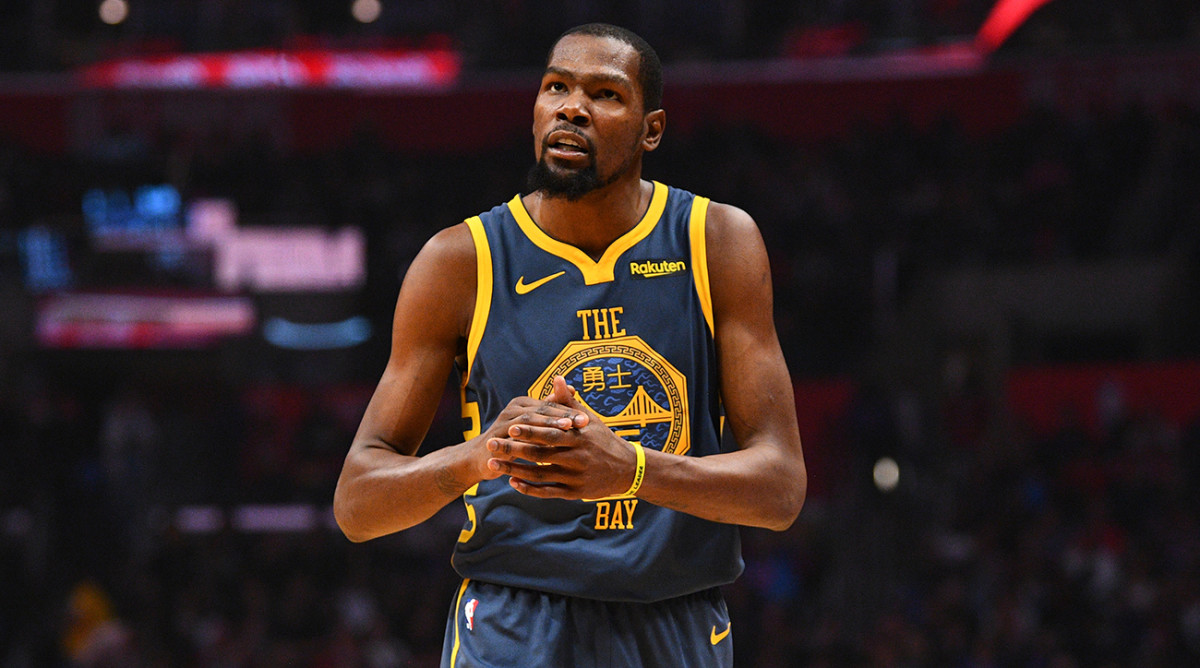 Kevin Durant signed a two-year, $54 million contract with the Golden State Warriors in July 2016. Surprisingly though, both the NBA analysts and the public were critical of his decision.

In October 2016, Durant’s first game with the Warriors ended in a loss to the San Antonio Spurs. He made a fierce comeback against the Minnesota Timberwolves, thus recording a career-high 6 block shots. Moreover, he created history by recording 5 blocks, 5 assists, 10 rebounds, and 25 points in a single game.

Kevin Durant returned to the 2016-2017 season after suffering an injury. Subsequently, he appeared in the Warriors’ third consecutive NBA final. There, they faced the defending champions Cleveland Cavaliers. Durant became his team’s leading scorer. He averaged 35.2 points, 8.4 rebounds, and 5.4 assists. His shots were 55.5% from the field, 92.7% from the free-throw line, and 47.4% from the 3-point range. Thus, his gameplay helped his club win the title. He was crowned NBA Finals MVP for his amazing effort.

The following season was even better for Durant. Firstly, the Warriors reached the NBA finals for the second consecutive year. Secondly, they defeated the Cavaliers in the Western Conference finals. And most importantly, Durant scored a career-high 43 points, 13 rebounds, and 7 assists. That season, he won his second straight ‘Finals MVP’ honor in addition.

The Warriors, however, suffered many losses against the Los Angeles Clippers in the 2018-2019 season. Durant injured his lower right calf in Game 5 of the 2019 NBA Finals while playing against Toronto.

Kevin Durant officially signed a sign-and-trade contract with the Brooklyn Nets on July 7, 2019. He made his Nets debut against the Golden State Warriors on December 22, 2020. That match saw him scoring 22 points, 5 rebounds, 3 assists, and 3 steals in a 125-99 victory.

Durant had 49 points, 17 rebounds, and 10 assists in Game 5 of the conference playoffs against the Milwaukee Bucks. And once again, he guided the Nets to a 114-108 comeback victory. In Game 7, he scored 48 points against the Bucks on the contrary. However, Durant’s 48 points were the highest in a Game 7 in NBA postseason history.

Kevin Durant has a $200 million net worth. He is undoubtedly one of the five highest-paid players in the NBA, with a $42 million salary. Additionally, his several lucrative endorsement deals enable him to earn millions of dollars each year.

Moreover, Durant is a tech investor and has made more than 40 early-stage investments. Nike pays him $26 million per year. Besides, he also has small investments in a variety of businesses. Notable ones include Postmates and Acorns, an investment platform.

Throughout his career, Kevin Durant has actively participated in charity ventures. He donated $1 million to the American Red Cross in 2013 to help the victims of the Moore tornado. His kindness prompted the Thunder and Nike to match his donation. He also serves as a speaker for P’Tones Records, a non-profit after-school music program based in Washington, D.C.

Durant became involved with YouTube in 2017. In February, he paid a visit to YouTube’s headquarters to deliver a speech. He started a YouTube account on April 7, 2017. Henceforth, he began uploading live stream vlogs to it shortly after.

Durant’s YouTube channel has over 790K members and 38 million video views, as of June 2020. Durant will reportedly create a basketball-themed written drama for Apple in collaboration with producer Brian Grazer’s Imagine TV. 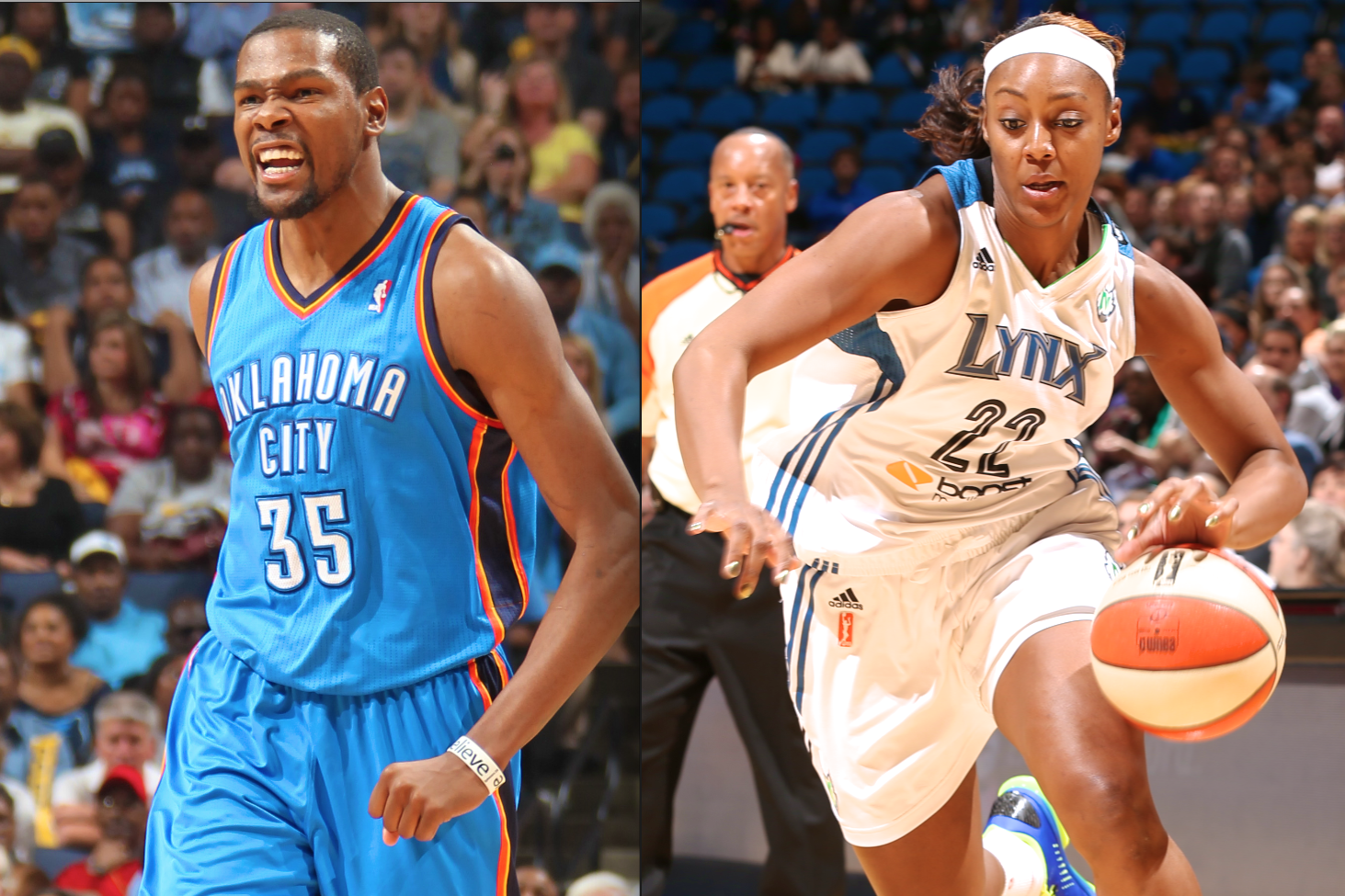 Well, Kevin Durant is a huge name. He has a lot going on for him presently. Perhaps settling down and starting a family isn’t on his mind right now. There have been plenty of stories and rumors about his affairs throughout the years. So, let us take a look at his sporadic love life.

Henceforth, we bring you the usual searches on the web about the basketball star, Kevin Durant. 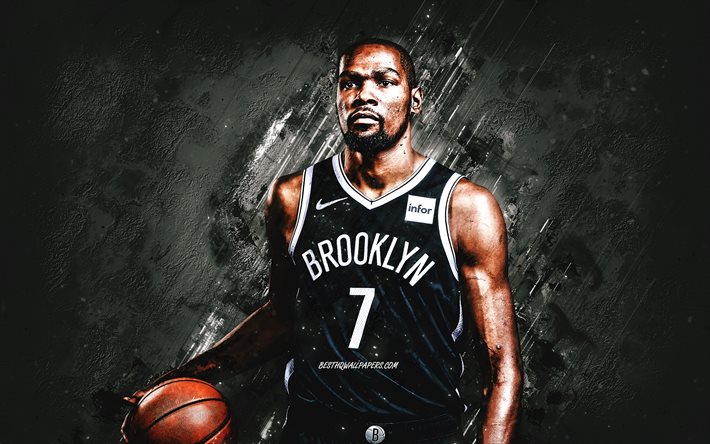 His birthday falls on September 29 every year.