Shotzi is an American professional wrestler who is presently contracted to WWE. Shotzi Blackheart was her prior name. For her performance that year, she was named Breakout Star of the Year in 2020. Also, she has shared the NXT Women’s Tag Team Championship with Ember Moon once. Pro Wrestling Illustrated just named her as the 30th best wrestler in the PWI Women’s 150 in 2021. Number 30 Women wrestler is presently competing in the Smackdown Brand in 2021. Also, she debuted on Smackdown alongside her partner Tegan Nox. Also, she has already won the AWS Women’s Championship and the EBPW Ladies Championship once each. Moreover, she was named the Phoenix of the RISE Championship champion. In this article, we are talking about her. So, keep reading to know more about this star lady.

Ashley Louise Urbanski is a professional wrestler from the United States. Also, she currently competes for WWE under the ring name Shotzi Blackheart on the SmackDown brand. Also, she is 29 years old. So, she is still relatively fresh to WWE’s women’s division. Also, she has achieved great success in a short period of time and is quickly becoming a public favorite. Also, she began as a heel on the WWE main roster, but her dynamic performances and charm helped her win over the fans.

She is expected to take over the Women’s division and win the title in the near future. Ashley was born on March 14, 1992, in the San Francisco Bay Area community of Santa Clara County, California. Also, she is of Filipino and Polish ancestry and has no ties to the wrestling industry. Also, she participated in gymnastics in school and was also quite interested in theatrical society. In this article, we will discuss Ashely’s career in professional wrestling as well as her net worth. 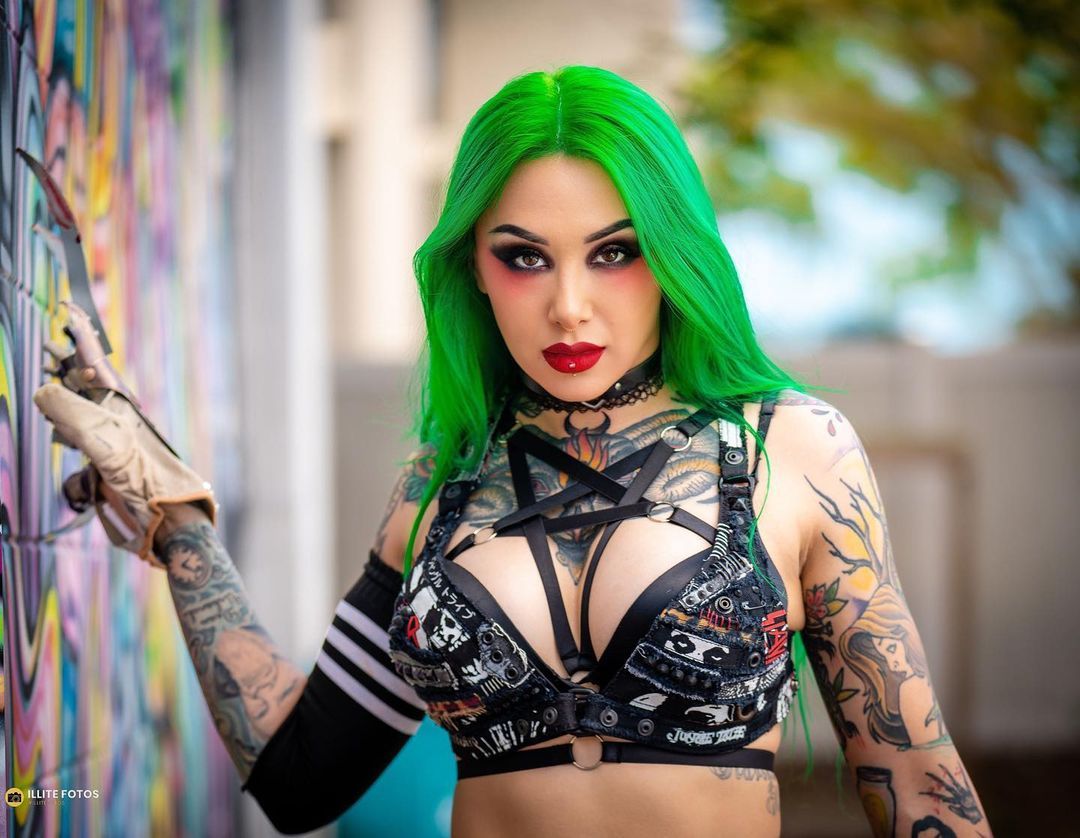 Urbanski initially came into touch with World Wrestling Entertainment in 2015, when she tried out for the sixth season of Tough Enough. Also, she didn’t make the 14-person tryout field because she missed a medical deadline.

In October 2019, it was revealed that Blackheart had signed with WWE four years after Tough Enough Season VI. Then, she made her television debut on the Christmas episode of NXT after wrestling her first official WWE bout during a December 5 NXT Live event, losing to Bianca Belair. Also, she returned to television the following year, on January 15, 2020, on the NXT show, when she participated in a Number One Contendership Battle Royal for the NXT Women’s Championship. During the January 22 episode of NXT, Blackheart lost her second singles bout to Shayna Baszler. During the 2020 Royal Rumble, Blackheart also competed in her first Royal Rumble match, where she was eliminated by Shayna Baszler. The next week, on the January 29 broadcast of NXT, Blackheart defeated Deonna Purrazzo in her maiden singles triumph. After the COVID-19 outbreak was proclaimed in the United States in March of that year, Blackheart continued to appear in NXT for the rest of the year. Health rules practically barred the general population from attending live events. After March 2020, Blackheart made frequent appearances on NXT television, which was aired to virtual audiences online. Then, she was frequently featured in Number One Contender boats for Women’s singles or tag team titles in NXT.

Blackheart proceeded in the 2021 Dusty Rhodes Tag Team Classic with Ember Moon until NXT TakeOver, when they were eliminated in the final by Dakota Kai & Raquel Gonzalez. Then, she and Moon beat Dakota Kai and Raquel Gonzalez to capture the NXT Women’s Tag Team championships on the March 10 edition of NXT. They remained champions until the May 4 edition of NXT, when they were defeated in a street brawl by Indi Hartwell and Candice LeRae.

Shotzi Blackheart is a WWE wrestler with an estimated net worth of $200,000 USD. Although wrestling provides the majority of her income, she also receives bonuses, allowances, and incentives from the sport. According to reports, Missy Hyasshit’s basic salary from WWE is around $120,000. Also, WWE wrestlers like Shotzi profit from pay-per-view events as well. According to rumors, a WWE female wrestler may make up to $3 million per year. Becky Lynch is the highest-paid female athlete, earning $3.1 million. Ronda Rousey comes in second, earning $2.1 million.

Blackheart was rumored to have signed with WWE and will report to the WWE Performance Center on October 15, 2019. So, on December 5, 2019, Blackheart made her live NXT house show debut, losing to Chelsea Green. Then, on December 18, 2019, she made her NXT debut against Bianca Belair. Then, on the January 15, 2020 episode of NXT, Blackheart competed in a battle royal for a shot at the NXT Women’s Championship at NXT TakeOver: Portland, where she defeated Shayna Baszler. This resulted in a bout against Baszler in the following show, which Blackheart lost. 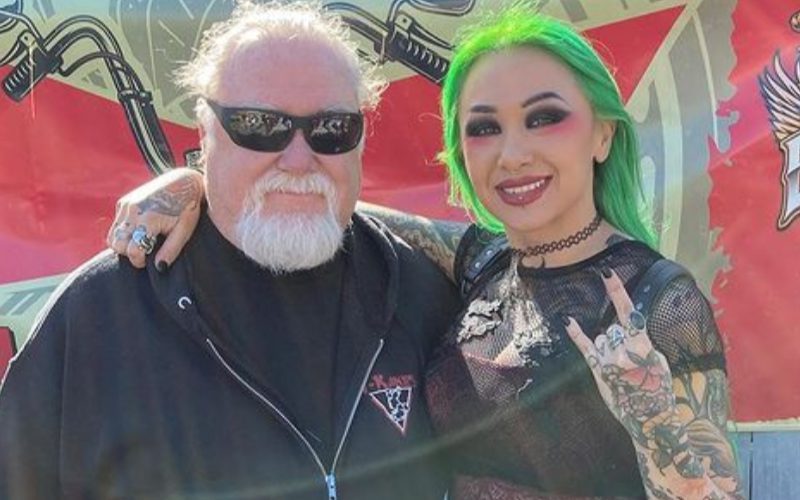 Blackheart entered the women’s Royal Rumble match at number 26 before being eliminated by Shayna Baszler, making it all the way to the final seven. Furthermore, following the bout, she was attacked backstage by Deonna Purrazzo, setting in a battle between the two on the January 29, 2020 edition, in which Blackheart beat Purrazzo by performing the Senton Splash.

We identified no proof of Blackheart having relationships or affairs with any of her lovers when searching through her social media. The 2020 Breakout Star of the Year appears to keep her personal life under wraps. However, it is probable that the female wrestler is now dating Jesus Alfaro and is keeping their relationship quiet. Who knows what shocks await her in the future. Pizza Cat uses Instagram to post photos of herself with both male and female acquaintances. Also, her Instagram account states that she likes riding motorcycles and viewing horror movies. Also, she also appreciates the music of Elvis Presley.

Tegan Nox spoke about her divorce from Shotzi on the most recent edition of Into The Danger Zone with Chris Denker. The unexpected divorce of a team destined to win WWE Women’s Tag Team Champions was shocking for both people. “It was a challenge.” “During that entire stay, Shotzi and I were extremely close,” Newell stated. “I was driving, Shotzi was in the seat next to me, and Toni [Storm] was in the back, and she yelled, ‘Oh my gosh, you’re on Raw, we’re on Raw,'” she explained. “Wait, no, I’m still on Smackdown,” she said. They made a blunder”. Tegan Nox says that anyone who believes every wrestler is aware of Draft maneuvers is mistaken. Unfortunately, the split caught them off guard. For a squad that many predicted would win the championship, not even Tegan Nox and Shotzi saw it coming. “I have no idea. We were the top candidates for around 6 to 7 weeks. We won several number one contendership matches. But, no, they didn’t offer us any hints. We only learned about it through Twitter.” While Tegan Nox’s tenure on the main roster ended prematurely, her time in WWE may have gone differently if she had continued in NXT. Remaining in NXT may have been the only thing that kept her spirits up throughout a difficult time. If Tegan had a say in the matter, her conflict with Dakota Kai may have gone farther.

Dakota and a healthy Tegan Nox did not have a long-term relationship because her tenure in NXT ended immediately after she returned. Also, her time on the main roster likewise came to an end with little to show for it. Nox had a bad time all around. “I never felt like I got a real run in NXT because of all the knee surgeries and everything. I was having a good time at NXT. My feud with Dakota was most likely my best wrestling setting I’ve ever been in. It was a lot of fun.” 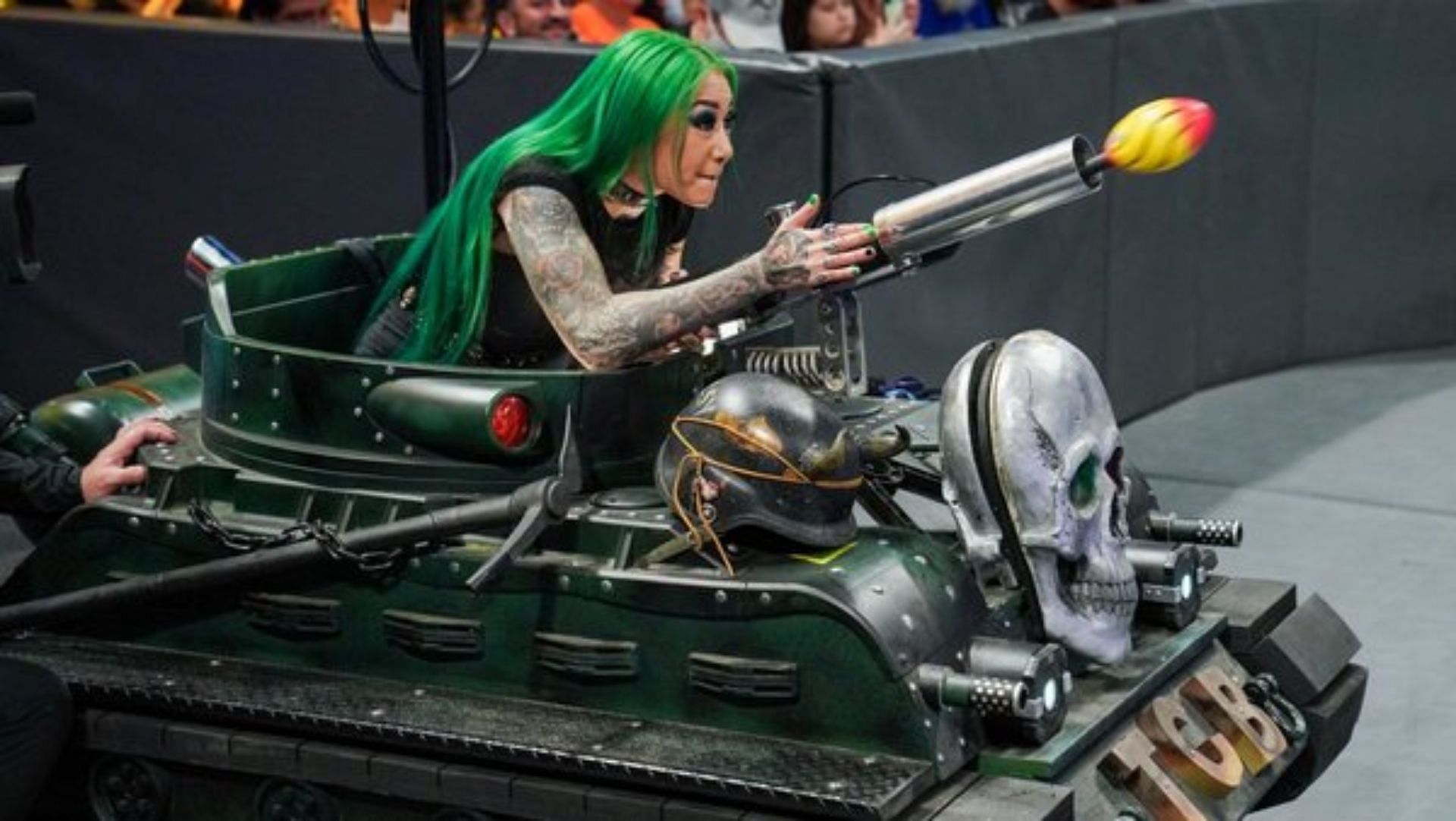 Former NXT star Shotzi Blackheart lost both her last name and her compact armored battle vehicle meant as a major offensive weapon in front-line ground warfare, commonly known as a tank, shortly after getting promoted to WWE’s main roster. Shotzi used to drive down the ramp in a small tank ahead of her matches in NXT, as you may recall. The tank gimmick was a hit with NXT fans, but all good things must come to an end. The tank joined Shotzi on the main roster, however it was removed once Shotzi experienced a minor personality change. During a recent Out Of Character podcast interview with Ryan Satin, Shotzi informed listeners that the choice to jettison the tank was not her own. Also, she is, nevertheless, pleased about her new character.

WWE talent Shotzi Blackheart posted to Twitter shortly after the completion of AEW’s inaugural Blood & Guts bout in May to tweet a clip that appeared to parody Chris Jericho’s fall from the Blood & Guts cage. Shotzi’s tweet was brought up again months later in an interview with TalkSport. While Shotzi made it plain that she intended no disrespect to Jericho, she refused to back down from what she considered a joke. “I didn’t want to offend Chris Jericho,” Shotzi said. “Honestly, I thought the contest was fantastic. But, you know what, like, take a joke, bud! It’s only a GIF. Let it go and move forward. It’s live television. Things happen in professional wrestling. All I have to say is don’t take life too seriously.”

Jericho, who sustained a serious elbow injury in the fall, was not amused. Jericho alluded to Shotzi’s comments on his Saturday Night Special stream in late June, without naming her. “Anyone who bags on someone who’s taking a risk and putting their bodies on the line can f*** off,” Jericho said. “People in business, in particular. I could name some people. There are a couple of WWE women who have said things they should not have said. They were probably not better trained, and in 6 months they’ll probably be looking for a job anyhow, and I’ll remember that, so we’ll leave it at that.” 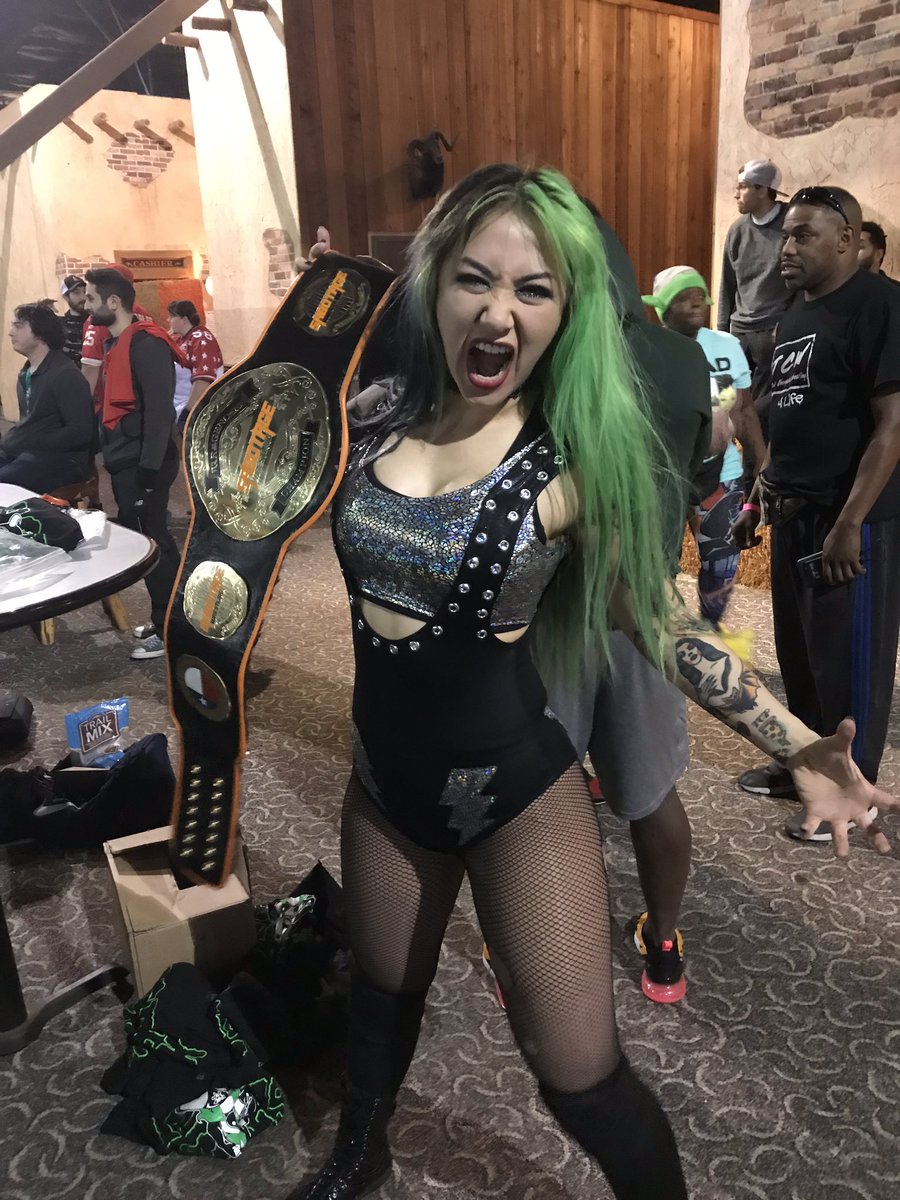 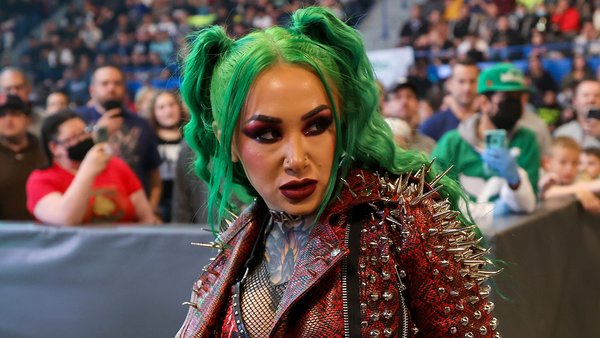 What does TCB mean Shotzi Blackheart?

When Shotzi Blackheart and Ember Moon tagged together on NXT, they named themselves Team TCB. Also, they never revealed the exact meaning of TCB. But the acronym TCB means for taking care of business, which seems like a fitting moniker for a wrestling tag team.

WWE shocked fans by turning Shotzi Blackheart villain. Also, she defeated Sasha Banks in what looks to be her first WWE singles rivalry. This alteration will also result in the removal of a fan favorite part of Shotzi’s persona.

When did Shotzi Blackheart debut in NXT?

Ashley Urbanski (born March 13, 1991) is a professional wrestler from the United States who goes by the ring name Shotzi Blackheart. Also, she made her WWE NXT debut on December 25, 2019, following a personal request from William Regal to join NXT.

What happened to Shotzi WWE?

Shotzi, the former NXT Women’s Tag Team Champion, was bloodied during the Women’s Money in the Bank Ladder match that began this year’s show. Top RAW and SmackDown performers competed for a chance to win the prized briefcase.

Is Shotzi Blackheart a good wrestler?

Shotzi Blackheart isn’t a really talented wrestler in general. Also, her finest work came in NXT, when she was more of an on-camera personality than a wrestler. She’s a nasty wrestler who might be difficult to watch at times. She had a few tough matches, but they were few and far between.

Is Shotzi Blackheart related to the Hardy Boys?

The reality of April 11 brought some tragic news concerning two members of our community: Matt and Jeff Hardy’s father and Shotzi Blackheart’s dad both died recently.

Does WWE pay their wrestlers per match?

According to the employment portal Simply Hired, the average yearly salary for a professional wrestler in 2021 was $51,537. Salary ranges provided by employees varied from $23,237 to $114,301 per year. Also, WWE pays these wrestlers per match and the more matches they compete in, the more money they make.